St Ninian’s is a small, attractive stone building on the shore of Loch Meiklie in Glen     Urquhart. The site was given to the Episcopal Church with the churchyard in 1851. It was consecrated, being free from debt on St Matthew’s Day 1853, by Bishop Robert Eden. 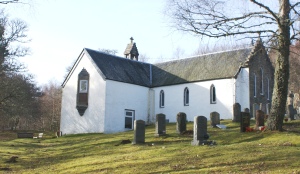 The architect was Dr Alexander Ross, who was also architect of the Cathedral and of  many other churches in the Diocese.The church has a simple rectangular plan, with a shallow

crow-stepped projection to the east, and a crow-stepped belfry at the west end. In the south wall, the vestry has an oriel window overlooking the loch, while the north and south walls of the church have simple lancet windows; the modem east windows were added in 1985.  The interior has a rafter and arch-braced roof with a tie beam at  the  chancel.

Set into the altar is a stone carved with a simple cross which came from the now demolished church at Temple in the mouth of Glen Urquhart. It was moved from there to Corrimony House, and then in the 1960s to its present location. Historians now consider that Temple was the most northerly base of St Ninian, so this very early cross may have been seen by our Patron Saint at the end of the 4th century.

There are two rugs with Celtic animal designs in the Sanctuary; they were designed 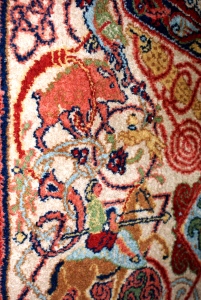 by George Bain (1881 – 1968), the artist who studied Celtic art techniques such as knotwork and interlace; they are known as his hunting rugs.

The roof beam bears the Gaelic inscription: So geata na beatha siorraidh, meaning: This is the gate of everlasting life.